By: Steven Sigel at ReJournals 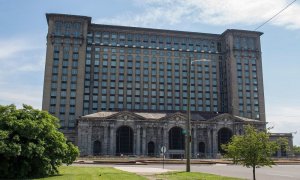 On June 18, hundreds gathered around the Michigan Central Depot, Detroit’s 500,000-square-foot decrepit former central train station. The building has served as a symbol of the city’s various ailments wrapped up in one gigantic piece of real estate: globalization, lack of opportunities, civic mismanagement. Yet, this time the crowd was not gathered for a pity party.

Attendees were watching Bill Ford Jr., Ford Motor Company’s 61-year-old executive chairman, discussing the 115-year-old train station’s future. Like the city itself, the former station is undergoing a rebirth: it will be home to Ford’s autonomous vehicle team after a $740 million renovation.